Foundation Specialists [FS] method of Stone Columns / Gravel Piers  installation  is  the  Bottom Feeding   Vibro- Displacement  done by using  powerfful Vibrators to drive a heavy steel cylindrical hollow  Mandrel  into the ground to be improved. The Mandrel  is provided with a top hopper into which the gravel is loaded and with a dual function bottom discharge mechanism, which efficiently discharges and then compacts the gravel bottom-fed into the hole created by the Mandrel.  The FS Stone Columns / Gravel Piers method produces the compaction of soil treated, by the lateral displacement created by Vibro Driving the heavy cylindrical steel Mandrel into the ground, and provides optimal compaction of gravel into the soil formation, to form stiff permeable gravel columns. FS method creates NO spoils to be removed  from site. The process of loading gravel into the top hopper and vibro Driving the heavy cylindrical mandrel into the ground can be repeated a number of times to force more gravel into the ground when larger diameter Stone Columns/Gravel- Piers. are required  by design. The FS Stone Columns / Gravel Piers Vibro-Displacement is a ground improvement method which is both cost and time efficient. Bearing capacity and shear strength of the soil treated by this method are due to the great permeability of the clean gravel installed, act as very efficient vertical drains : in water saturated soil facilitate early or immediate consolidation by favoring the dissipation of excess pore water caused by the lateral displacement produced by the vibro-driving of the heavy mandrel, while in the presence of shallow water table, the highly permeable vertical drains also drastically reduce the potential for soil liquefaction during seismic evehigh-frequency nts. The field of application of FS Stone Columns / Gravel Piers is huge, because they can be installed in all kind of soil needing consolidation, the improvement caused by the installed columns or piers is immediate, and the method is ideal for roads, industrial and commercial areas, housing, and wherever immediate soil improvement is required at manageable cost. The Stone Columns / Gravel Piers are installed vertically in the ground in either a triangular or square grid to the design depth. Compacted gravel is usually placed over the area of the Stone Columns / Gravel Piers, in preparation for the next stage of construction. The typical Triangular and Square Grid and the mechanism of load transfer of Stone Columns / Gravel Piers are shown in Figure A-A Field of application of Stone Columns Gravel Piers is very wide, the technology is reliable and efficient, the cost somehow modest, the results immediate; stone columns work well as support for roads’ and railways’ embankments, under stock-yards, airports’ runways and taxiways and parking aprons, under box culvers, bridge approaches, ramps, warehouses’ slabs, & for housing. As for every other type of soil improvement, it is desirable, proper and advantageous to perform testing of Stone Columns / Gravel Piers at the project site, in actual conditions, which would enable the designer to verify the in situ performance of stone columns and the degree of improvement within the “areas of influence” of Stone Columns, ahead of proceeding to full installation of Stone Columns. Testing of Stone Columns is generally done by Plate Test performed directly on the Stone column head, while testing of the surrounding improved soil within the Stone Column’s area of influence [See Fig. B-B] Is done in situ, with Plate Load Test, SPT, Dutch Cone Penetrometer, Piezometers, and in Soil Laboratory using specimens extracted from the site, determining shear strength, unconfined and confined compression strength,. Figure A-A shows the sequence of bottom-fed vibro-driving of Stone Columns / Gravel Piers installed by vibro- driving a cylindrical hollow steel mandrel gradually into the ground to be improved. The vibro-driven mandrel penetrates into the ground by displacing / compressing laterally the original soil, thus producing a dynamic compaction of the soil surrounding the Stone Columns’ position [Area of Influence / Soil Compacted by the Lateral Displacement produced by the Vibro-Displacement of Stone Columns, SEE Fig. C-C], Clean Gravel with size ranging from ¾” to 3” (20 mm to 75 mm) is bottom dumped into the hole while the vibrating mandrel in being alternately slowly lifted discharging stones and then dropped to compact. The process is repeated until the scheduled amount of stones / gravel has been introduced into the ground and compacted, increasing the Stone Column’s diameter. Shown in Fig. A-A is also the typical section enlargement created in correspondence of the softer soil layers. Figure B-B shows the typical patterns used for the installation of Stone Columns / Gravel Piers. The Square & Hexagonal shaded areas shown in Figure B-B, and Figure C-C are the typical “areas of influence” of one single Stone Column or Gravel Pier in a Square or Triangular Installation Pattern, respectively. Pictures 2, 3, 4 show some of the several equipment of Foundation Specialists Inc. used to install a total of 547,950 linear meters of Stone Columns in 2010 for the SINOMAC North Rail Project, in 2010, The average stone column depth was 12.4 meters with a final diameter of 600 mm, obtained using the Bottom Feeding Vibro-Displacement Method with a Mandrel 420 mm in diameter , driven by a powerful Vibro-Hammer, repeatedly until the design stone / gravel volume of each Stone Column/ Gravel Pier was entirely installed and compacted, into the original water saturated Sandy Silty Clay formations, providing a stable foundation under the Railway tall Embankments, under the Approach Ramps of the Bridges, under the R.C. Box Culverts and in all areas where the potential for Liquefaction and for Long Term Settlements had to be totally eliminated. 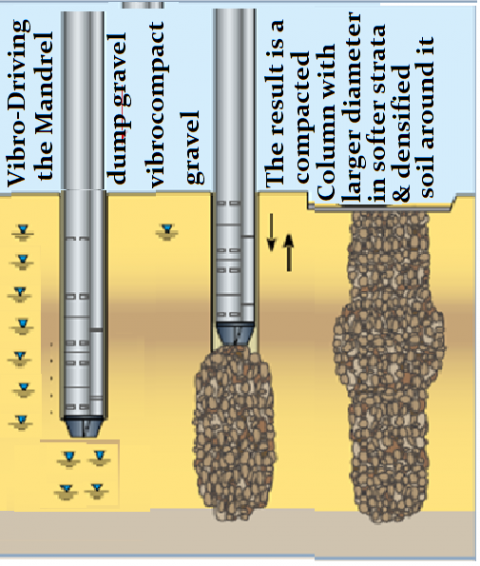 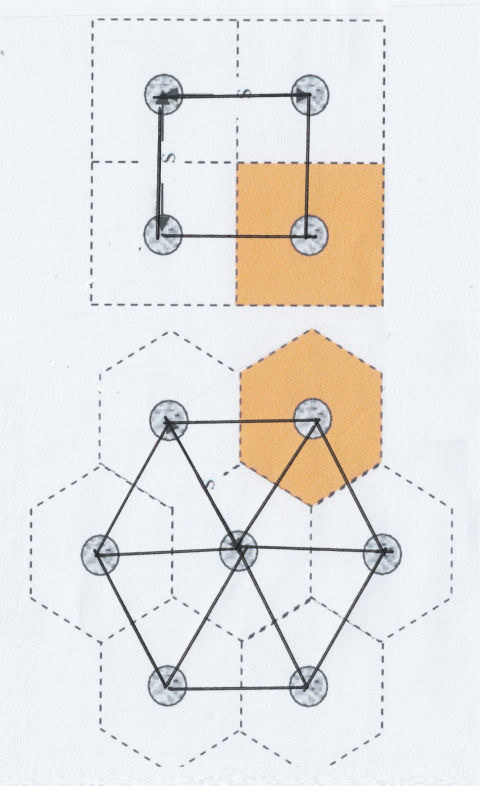 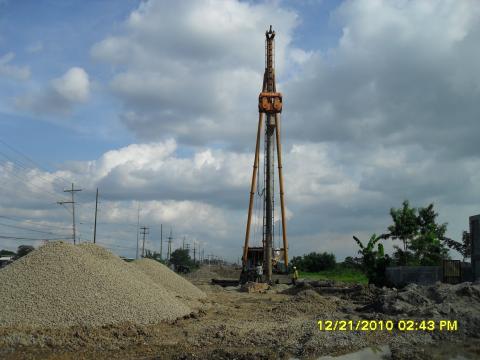 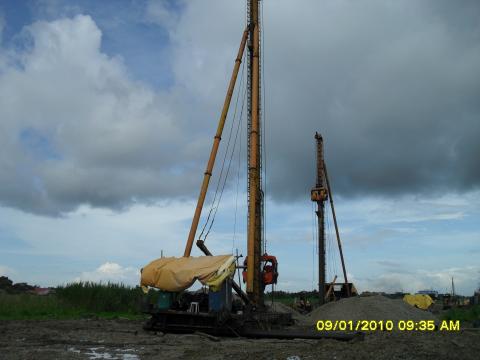 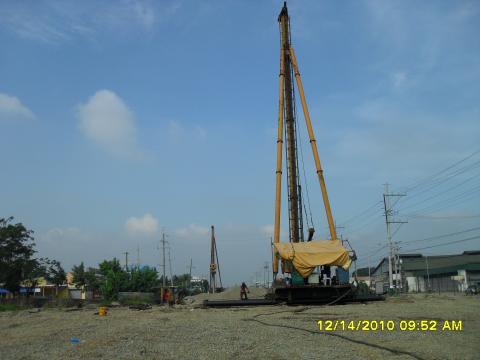